Bisons on the streets! Such a thing only in Poland. In Eastern Poland...

As you can see in the pictures, bisons like Bialowieza. Wild animals live in the surrounding Bialowieza forest, but sometimes also go on the streets. 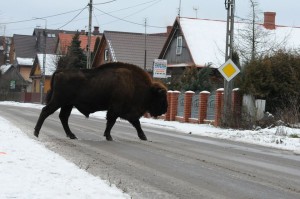 The European bison (Bison bonasus), also known as wisent or the European wood bison. It is the heaviest wild animal in Europe. In the free-ranging population of the Białowieża Forest body masses among adults are 634 kg, but an occasional big bull European bison can weigh up to 1,000 kg.

In Poland live more than 1,400 bisons, out of which 1,200 are in free-range herds. You can come across them not only in Bialowieza, but also in the Knyszyn Forest and Bieszczady Mountains.

The best time to watch bison in their natural habitat is the late autumn, winter and early spring –when they gather in larger herds. It should be remembered that wild, frightened animals can cause serious injury. That is why it is best to watch them from a safe distance.

Safe and convenient way to see bison is a visit a bison reserve. In Bialowieza is also worth to see wild a natural part of Bialowieza Forest (UNESCO World Heritage Site) and beautiful original architecture of surrounding villages. You can also have a short visa-free trip to Belarus.